We use cookies to improve your experience. By your continued use of this site you accept such use. To change your settings please see our Privacy Policy .
I Understand

On June 1, 2021, United Microelectronics Corporation announced its pledge to reach net zero carbon emissions by 2050 and to take concrete steps to Net Zero Action as the first semiconductor foundry globally. UMC is ardently responding to the Paris Climate Agreement goal and pursuing efforts to limit the global warming not exceeding 1.5°C. In the meantime, UMC has obtained admission into RE100, becoming the second semiconductor wafer foundry in this initiative, and committed to use 100% renewable energy by 2050 by setting progressive goals of 15% by 2025 and 30% by 2030. Additionally, UMC is teaming up with more than 500 suppliers, including Applied Materials, Inc (AMAT), Tokyo Electron Limited (TEL), and Photonics DNP Semiconductor Mask Corp. (PDMC), in cutting carbon emissions with the goal of a 20% reduction and raising renewable energy to 20% of total power consumption by 2030 in UMC supply chain. Together with its suppliers, UMC aims to build a low-carbon and sustainable supply chain. 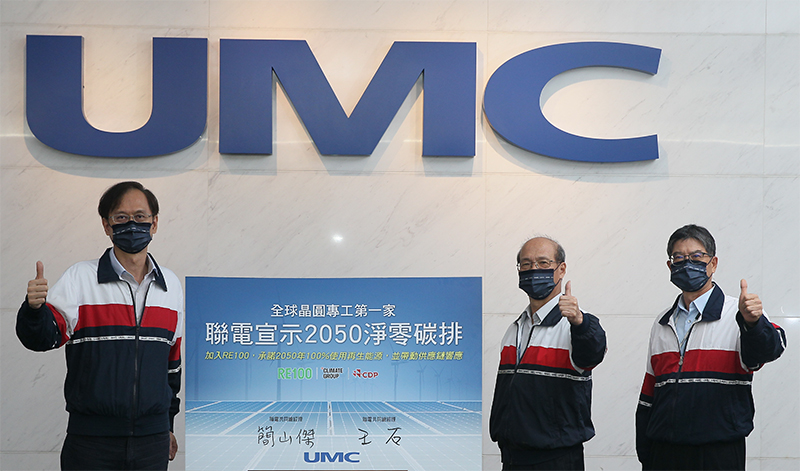 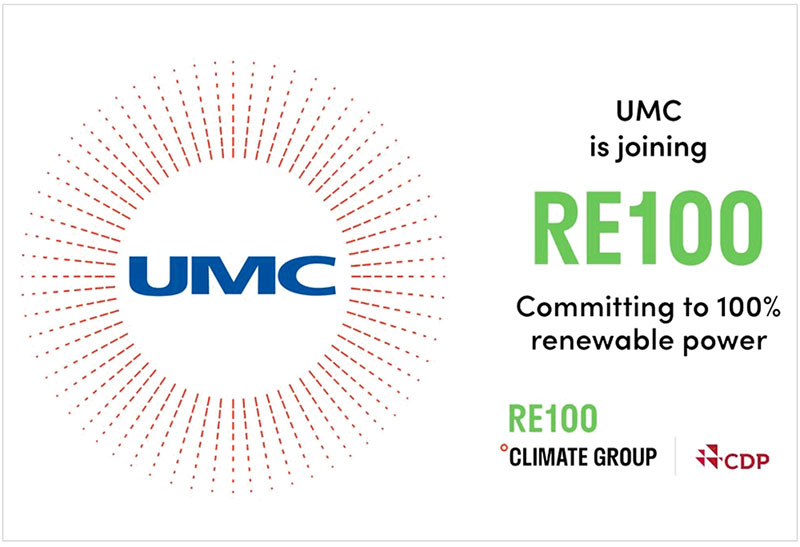 Sam Kimmins, Head of RE100, The Climate Group said: “I am delighted to welcome UMC to RE100. By committing to 100% renewable electricity by 2050, UMC joins over 300 of the world’s leading businesses committed to driving market change. This sends a powerful message that renewable electricity makes good business sense, and we encourage others to follow.”

SC Chien, UMC co-president and Chief Sustainability Officer (CSO), stated: “Climate change is the single biggest threat to our planet’s sustainability. Despite the COVID-19 pandemic, we still make efforts to fight climate change, which is why we are able to unveil our pledge to achieve net-zero emissions by 2050 just ahead of World Environment Day on June 5. As a global citizen, we are doing our part to build sustainable living for mankind.”

UMC established the Corporate Sustainability Committee in 2008, leading the industry to systematically promote corporate governance, environmental protection and social participation. And since then, UMC has been listed as a global index component of the Dow Jones Sustainability Index (DJSI) for 13 consecutive years. In response to greater level of concerns about ESG governance, UMC established the ESG Steering Committee in 2020 Q4 to strengthen ESG governance within existing corporate structure. Two co-presidents are heading the committee as chairs and all management team members are involved in. A CSO, Chief Sustainability Officer, is also appointed. Furthermore, UMC has issued green bonds for the first time in early April 2021 to promote ESG. The funds raised are mainly used for projects such as the construction of renewable energy systems, the improvement of equipment energy efficiency, and the prevention and control of manufacturing process pollutions. UMC’s practices on climate change governance are also in line with the international TCFD (Task Force on Climate-related Financial Disclosures) initiative. In May 2021, UMC led its global wafer foundry peers to pass the “TCFD Third-Party performance assessment,” and was rated as the highest “pioneer level” by the inspection agency SGS Taiwan Ltd., endorsing that the climate change risk assessment system promoted by UMC and associated financial disclosure data are highly credible and transparent, which are fully in compliance with stakeholders' expectations.

UMC has consistently upheld the concept of “Green Production,” and has implemented energy and resource reduction plans since 2010, including “Project 333” (from 2010 to 2012),” Project 369+” (2013–2020) and “Green 2020” (2016–2020). As of 2020, total carbon reductions reached 12.26 megatons of carbon dioxide equivalent (CO2e), equal to 8.17 million hectares of forest annual carbon absorption. On the other hand, UMC is also working vigorously with its suppliers to make sustainability a reality. In 2017, UMC introduced the “Triple-R League” to promote Reducing, Reusing and Recycling with supply chain partners. Over the past three years, 39 suppliers have joined the initiative and together they made remarkable achievements - the carbon reductions efforts made by this project were about 4.09 million tons, equal to 27,000 hectares of forest annual carbon absorption.

Note: the factor of yearly forest carbon absorption is reference to Taiwan EPA, which is 15 tonnes per hectare.

RE100 is a global initiative bringing together the world’s most influential businesses committed to 100% renewable power. Led by international non-profit the Climate Group in partnership with CDP, the group has a total revenue of over US$6.6 trillion and operate in a diverse range of sectors. Together, they send a powerful signal to policymakers and investors to accelerate the transition to a clean economy.